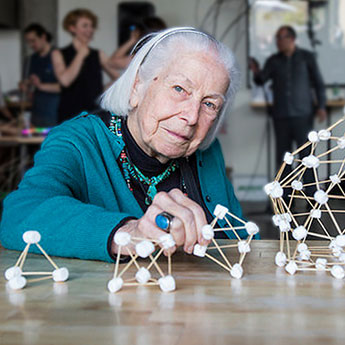 Allegra Fuller Snyder, professor emerita, former chair of UCLA's Department of Dance, and former director of the World Arts and Cultures interdisciplinary program (merged in 1995 to create the UCLA Department of World Arts and Cultures/Dance), passed away Sunday at the age of 93. Her research areas included performance dance, dance ethnology, dance therapy, and film as a method of preserving and documenting dance.

Snyder was an early chair of UCLA's Dance Department (1974-1980, Spring 1984, and 1990-1991), founding coordinator and chair for the Ethnic Arts Program cum World Arts and Cultures Department (1972-1983), Chair of the Faculty of the School of Arts (1989-1991), and Professor of Dance/Dance Ethnology until she retired from UCLA in 1991. She was long-active with the Congress on Research in Dance (CORD) and the National Endowment of Arts, dance division. Snyder was also a visiting professor of performance studies at New York University from 1982-83, and was honorary visiting professor at the University of Surrey, Guildford, England from 1983-84. She has also taught at CalArts and at Naropa Institute.

An early advocate of dance preservation on film for use in education, Snyder produced historical films about Mary Wigman and about Baroque dance, and a performance dance film about Margalit Oved Marshall. Her husband, film documentarian Robert Snyder, cooperated with her in the making of an ethnographic film about the Philippine dance troupe Bayanihan. She was a key consultant on "Dancing" for Thirteen WNET.
Snyder attended the School of American Ballet (1941-1947), received her BA in dance from Bennington College (1951), and earned her MA in dance from UCLA (1967). The last living child of R. Buckminster Fuller, she was born Aug. 28, 1927 in Chicago, IL. She was the founder and first president of the Buckminster Fuller Institute, presently located in Brooklyn NY.

Snyder was a much loved and respected scholar, teacher, and mentor for many globally. She was a pioneer in dance education, cared deeply about the dance discipline, and influenced the thoughts and careers of hundreds in the field.

Allegra Fuller Snyder is under the care of Jones, Rich & Barnes Funeral where you may share your memories.
https://www.dignitymemorial.com/obituaries/portland-me/allegra-snyder-10267280